Doing a lot of Citrix implementations I often find myself wanting to update Group policy on a number of Citrix servers to test changes.

One could log on to every single server and update group policy with the GPupdate command – but hey that would take forever.

Powershell to the rescue.

I created a function that queries for delivery groups and presents them with Out-GridView. Out-GridView is a native cmdlet in powershell that creates a sort of GUI for the object passed into it.

This looks like this in my test environment with two delivery groups present: 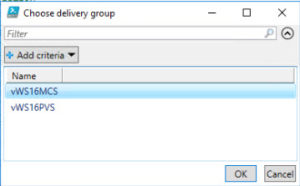 When the delivery group you want to update and press the OK button.

This passes the delivery group names on to the next step – selecting the servers to update: 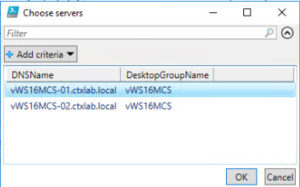 The servers choosen is then passed on to the part that dows the actual gpupdate part.

To speed things up in a larger environment the script does this with a powershell job for each server. These jobs run synchronously in batches of 32 by default. This number can be change with the ‘ThrottleLimit’ parameter for Invoke-Command.

Each job fires up a new Powershell instance on your computer so be carefull not to bloat with to many at a time.

If you want to view the progress an result you can use the Get-Job cmdlet:

And when it is has completed:

As you can see this the exact output as if you had run it locally on your own server.

As this uses Powershell remoting to do its job this has to be enabled. It is enabled by default in Windows Server 2012 and later.

I hope that others will find this usefull and please reach out if you have comments or things that could need improvement.

Here is the entire Powershell function:

This site uses Akismet to reduce spam. Learn how your comment data is processed.